By Wu RH, Compiled and translated by Tang YY and Rick Yoder

My Tai Chi team has taught training courses in suburbs of Washington, DC, with three devoted students of Ben Lo.  Since 2000, in collaboration with David Chen and Joanne Chang and, after David’s untimely passing, with Charles Votaw, we had many great experiences working with American T’ai Chi players who embraced the teaching of Master Lo.

In his class, Ben taught only what he had learned from Cheng Man-Ching.  Ben did not add his personal opinion or splashy frivolous techniques. Zhanzhuang (standing like a post) and form correction--the most fundamental of all teaching methods in Tai Chi Chuan--were also among the most favored activities in his class.

Even going back to 1990, post standing and form correction were all Ben taught in a class that Tang YY, my long-time translator, in North Carolina.  That workshop was organized by Frank Wong, a Cheng Man-Ching student, but it demonstrates that Ben Lo’s teaching style did not waiver over the years.

In that class, YY recalls, Ben would, for each posture, correct one student until he was satisfied before he moved around the room and did the same for the next student. All the while, all students were sweating as they stood, body weight on one bent leg. Their weighted legs were burning, no doubt, but they were enjoying the class very much. Over the course of a few hours, and only a few postures, the class would learn the valuable lesson of simply holding the posture until the body could find the correct alignment and relaxation.  Ben Lo would correct and position each person, but their body had to remember it.

The source of their burning thighs was “bend knee down low”, or “bend low”, which sounds almost just like Ben Lo. “Bend low” is almost a trademark of Ben Lo’s training method.

Bending low usually means burning thigh muscles for a practitioner. Burning in the thigh, more specifically the quadriceps, is essential to learning Tai Chi Chuan. Indeed, “no pain, no gain” has been Ben’s core training discipline. In addition to his love for T’ai Chi Chuan, David Chen was an accomplished artists.  Building on this concept, he captured Ben Lo’s teaching in this epic painting: a practitioner in post standing, a flame burning on his weighted thigh, underscored by the caption ‘No Burn, No Earn’.

In “no burn, no earn”, Ben pointed out clearly the path he took to learn Tai Chi Chuan--a way forward for Tai Chi Chuan practitioners everywhere. 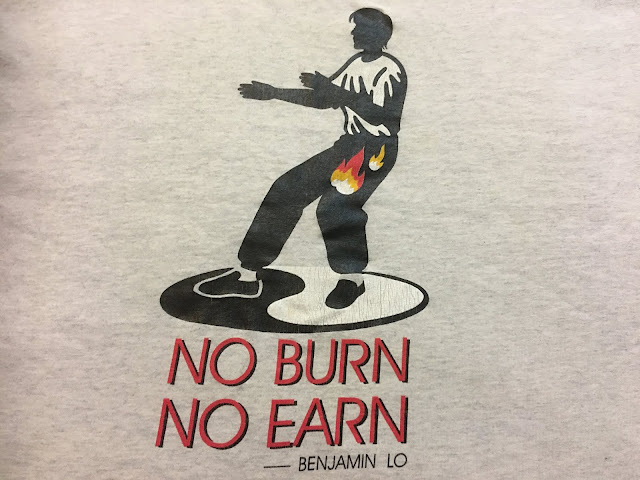 No arms in Tai Chi (NAIT)

No arms in Tai Chi (NAIT)
In Tai Chi Chuan, the arms never move by themselves. Instead, they move only as a result of a preceding movement in the waist or the leg. In other words, the arms are moved by gravity, ground reaction force, or inertia.Only when the arms don’t move by themselves can a practitioner remain light and agile, with which he or she can control steel with cotton.